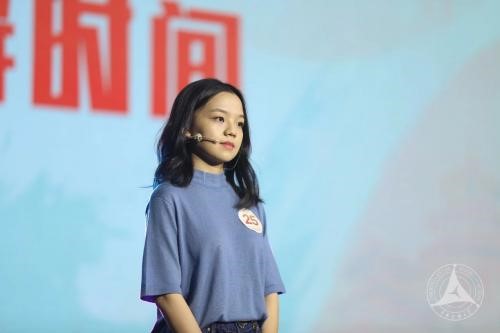 Lu YH, Class of 2015 Computer Science and Technology (Big Data Technology and Application). For the third consecutive year, the computer department has the first GPA. It has won three Central Taiwan scholarships and first-class scholarships. The three best students and excellent members of the Communist Youth League have been admitted to the Department of Information Art and Design of Tsinghua University. She is also the first person in the country’s first digital museum of traditional handicrafts.

That day was Qixi, the day when the girls begged to open their needles, and Lu Yihong began to learn embroidery from her mother. “The first stitch method I learned was seed embroidering. In the words of my mother, this kind of stitching method is ‘people who can embroider will embroider as soon as they come up, and people who can’t embroider can’t embroider well.’ After college, her mother occasionally came to Beijing to collect and watch exhibitions, and she followed. In this process, she listened to her mother telling many ancient stories and cultures. She became more and more fond of embroidery, and gradually developed her own understanding of embroidery culture.

The reporter came to the computer lab where Lu Yihong was located and found an unfinished embroidery on her computer table. Exquisite and lovely patterns are all over her bags, handkerchiefs, bookmarks, and even dolls. She smiled and said: “Embroidery is just a daily thing.”

Speaking of embroidery, many people will first think of embroidering women who hold white silk in hand and thread needles. And Lu Yihong is not the “embroidered mother” in the traditional sense. She used modern technology to create the Embroidery Digital Museum, which is inherited in a younger way. Embroidering it in the cloud is the first digital museum of traditional handicrafts in China. It integrates 34,599 pieces of 6.83G data and combines cutting-edge computer technologies such as intelligent recommendation, knowledge representation, data visualization, and graph database. Digitize the embroidery collection, sort it out, and display it, and establish an “embroidery cloud” platform. The team members are Lu Yihong, Huang Yike, Li Yilin, Li Min, Xiang Yingjie, Yan Zijing, Yan Mengzhu and JiaFeiran. The instructors are Yang Hong, Zhang Chi and Li Chunfang.

The original intention of Lu Yihong to establish the Embroidery Digital Museum was to use the mother’s in the field of embroidery to facilitate people’s understanding of the embroidery culture. The TaizhouFucheng Embroidery Museum has a large collection of embroidery handed down from the Ming and Qing Dynasties and the Republic of China. The embroidery is a private collection collected by Liao Chunmei who spent nearly thirty years visiting all parts of the country.

“Many classmates have a new understanding of embroidery just because of my brief introduction, so I want more people to have access to embroidery culture and find the connection between embroidery and life. The possibility of inheritance and innovation. “Lu Yihong said.

At that time, the “University Student Innovation and Entrepreneurship Training Program” was underway. Lu Yunghong seized the opportunity and quickly formed a student team to declare the “Daiso” project with the theme of digital museums. “This is a completely new attempt. We intend to use young people’s thinking and perspectives, and the use of Internet communication methods to promote excellent traditional crafts.” During the “Da Chuang” period, the team completed the construction of the digital museum technology framework.

On August 13, 2018, “Yunzhong Embroidery Bar”, the first domestic digital museum of traditional handicrafts founded by Lu Yihong and his team, was officially launched. The reporter opened the homepage of “Embroidery in the Cloud” and was instantly attracted by the elegant and refined page design. Lu Yihong said that the design elements of the website are all based on embroidery collections and adjusted with a modern aesthetic, so they have both a sense of fashion and classic beauty.

“Embroidery in the Cloud” has complete functions and novelty. In addition to the dazzling collection display, it also provides search, navigation, recommendation and other special functions. At the same time, it has opened “frontiers of the field”, “science popular articles”, “classic tutorials” and “online exhibitions “, Etc., to facilitate the public to learn the embroidery process knowledge.

“Embroidery in the cloud” also combines hotspots and festivals to launch theme activities, such as the launch of the “embroidery blessing generator” on the Qixi Festival, extracting embroidery elements to make blessings templates, and users can DIY blessings and send them out.

“Cloud embroider it” blessing to ChuanChuan

Compared with traditional museums, Yunzhong Embroidery Bar has gathered more resources in the field of embroidery and used modern methods of communication to solve the problems of difficulty in spreading museum collections and communication among embroidery lovers, and better opened up young people’s contact with embroidery. Channels.

With the recommendation of the teacher, Lu YHhong took the “Cloud Embroidery Bar” project to participate in the “China Bank Cup” 2018 Beijing Cultural and Creative Competition, and finally won the “organizing committee special award” in the Beijing final. Lu YH admitted frankly, “We have obtained more professional guidance and explored more possibilities.” When asked if she would persevere, she said: “A lot of people will waste their time on the swing, and I am more determined, I will definitely do this all the time, it’s just a matter of speed.”